Way back in Me-Made-May I realised that I was missing some wardrobe basics to help me put together an entirely me-made outfit.  At the time I made a few skirts and Colette Sorbettos but another area that I wanted to focus on was t-shirts.

I have a drawer full of slightly tatty, greying t-shirts and I generally buy a couple of new ones each year, love their shiny whiteness and wear them constantly until they blend in with all the grey ones and eventually become so shabby they are only fit for sleeping in. But I sew now – I don’t need to go to a shop to get a lovely new t-shirt!

I also had the perfect (and free) pattern so really no excuse not to get started – I already made the Deer and Doe Plantain tee in a long sleeved version for winter but it comes with a short sleeve pattern as well and pictures of other makes online were encouraging! I also recommend the Maria Denmark Kimono T which is free when you subscribe to her newsletter – I made a version of this last year.

For my first version I had some white cotton double knit that I bought last year from Tissu. It is quite thick and has a bit of stretch and was really nice to sew with. I used clear elastic to strengthen the shoulder seams as the pattern suggests – once I had learned to leave a bit overhanging at the start so it didn’t get chewed up by machine and changed to a new stretch needle this bit went much more smoothly! I don’t have an overlocker (really really want one…) so I used the lightening bolt stretch stitch on my machine for the side seams and the fake overlock stitch for the shoulders, neckband and sleeves. I also used a twin needle for the hem – this was my first time with a twin needle and it came out pretty well – it looks so much neater than my previous attempts to sew two lines by eye.

So – one new white tee – which was very pleasing to me but perhaps not the most exciting post ever! So I made some more…

Plantain number two – I picked up this white cotton knit fabric at Abakhan. It is is a much thinner fabric and has a kind of embossed swirly pattern on the right side – I thought at first it was a burnout fabric but actually the pattern is kind of painted on. This fabric really didn’t have much stretch and although I cut the same size each time this one came up as a bit more fitted than the others.

Finally I found some dark blue knit at Abakhan with a lot more drape than the others – maybe a viscose jersey? The fabric is very soft and an almost inky blue – I really enjoyed sewing this one. The finished t-shirt is definitely more relaxed and has more drape than the first two. This was lovely fabric – I really wish I had more of it but there was only about a metre. I took a couple of inches off before hemming this one as I wanted a slightly shorter one this time.  I would love to make more in other colours! 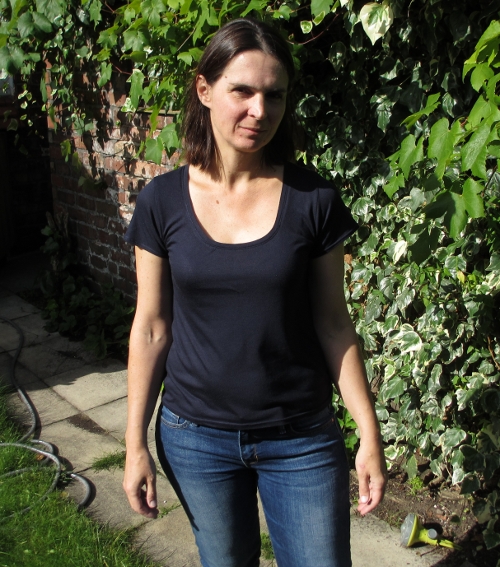 So that was my back to basics moment. I now have my new t-shirts which have had a lot of wear – particularly the blue one! What are the basics that you need in your wardorbe?